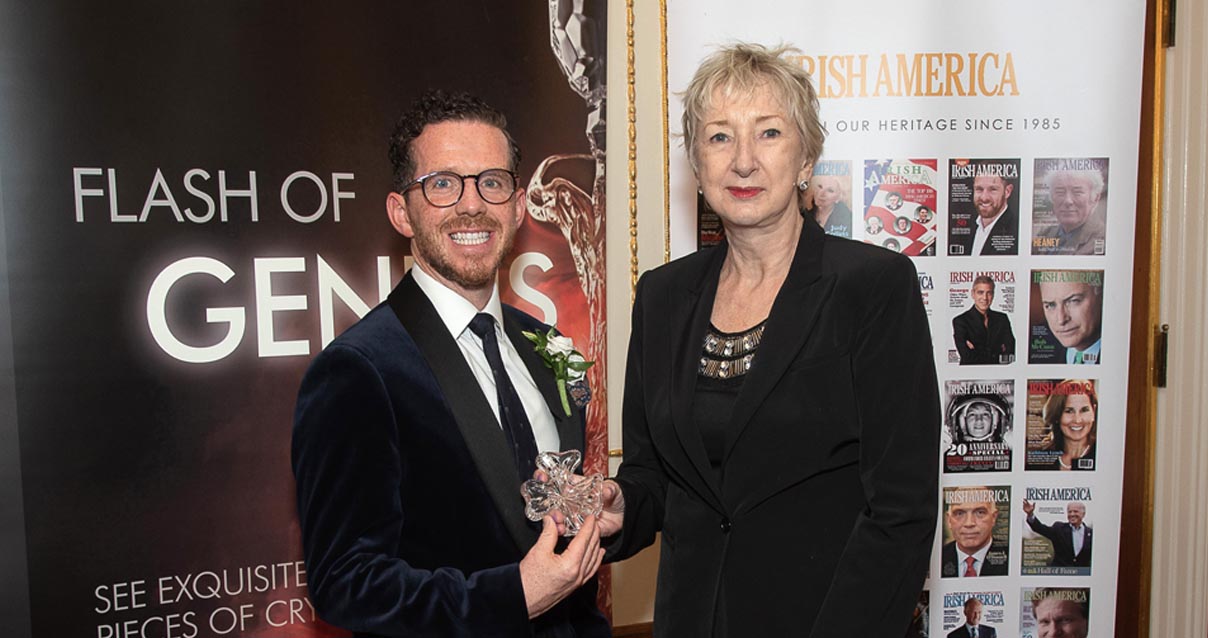 Posted at 10:00h in News by Admin-JohnNolan

A Waterford professor has been honoured at a prestigious awards dinner in New York. Professor John Nolan was named among the 2019 Healthcare & Life Sciences 50 announced by Irish America magazine at the Metropolitan Club in Manhattan. The list celebrates excellence by Irish and Irish-American leaders in fields such as medical care; pharmaceuticals; biotechnology; medical devices; research and development and life sciences venture capital.

Prof Nolan is a Howard Chair in Human Nutrition Research and is founder and director of the Nutrition Research Centre Ireland (NRCI). He is also the Principal Investigator of the Macular Pigment Research Group (a specialised group within this centre). The NRCI is part of the School of Health Science at Waterford Institute of Technology’s (WIT) West campus, where the Howard Foundation UK has invested in research infrastructure, people and studies.

Presenting the awards, Patricia Harty, editor, Irish America, said: “Prof Nolan is an inspiration to all of us. His work is truly revolutionary, especially in the area of nutritional supplementation for visual function. He and the others we recognise and celebrate with our Healthcare & Life Sciences 50 do incredible work with huge positive impacts on the lives of countless people around the world.

“Their efforts are inspirational – not least for how they persevere in the face of inevitable setbacks. We are very proud to celebrate them and their accomplishments across diverse sectors – all linked by improving health outcomes and pushing the boundaries of science.”

Prof Nolan said: “I’m obviously delighted and humbled to be celebrated in this way. The enduring links between Ireland and the USA are something we should never take for granted and my own research has benefited hugely from collaborating with colleagues at world-leading American universities going back to my time as a Fulbright Scholar in the Medical College of Georgia at Augusta University. In accepting the award, I am also very conscious that I do so on behalf of great teams of people in Waterford and elsewhere that I have worked with and continue to work with.”

The Carrick-on-Suir man’s research focuses primarily on the impact of targeted nutrition on vision and cognitive (brain) function. In 2011, he won a European Research Council grant that funded two major clinical trials titled Central Retinal Enrichment Supplementation Trials (CREST). Later showcased as examples of EU-funded research and innovation making a difference in everyday life, the research identified how targeted nutrition can improve visual function in the general population and among those with age-related macular degeneration (AMD).

As well as publishing more than 100 peer-reviewed scientific papers on his specialised area, Prof Nolan has helped establish two sister laboratories in the United States (at Duke University and University of California San Diego where he completed a five-month sabbatical in 2016-‘17). He chairs a biannual conference at Downing College in Cambridge and has edited a special issue of Molecular Nutrition & Food Research as well as having editorial roles at the European Journal of Ophthalmology and the Journal of Alzheimer’s Disease.

Current studies led by Prof Nolan at the NRCI are investigating the link between nutrition and brain health and function, with important implications for Alzheimer’s disease.